The Jewish state is the only country so far backing a Kurdish state, hoping it will serve as a bulwark against Islamic extremism

Kirkuk’s provincial governor Najim al-Din Karim (3rd-R), who was sacked by the Iraqi parliament the previous week, attends a rally in support of the upcoming independence referendum in Kirkuk on September 19, 2017, accompanied by the former speaker of the Kurdistan parliament and leading member of the Kurdistan Democratic Party, Kamal Kirkuki (2nd-R).

AFP — Israel has become the only country to openly support an independent Kurdish state, a result of good ties between Kurds and Jews and expectations that it would be a front against Iran and extremism, experts say.

Iraq’s Kurdish region plans to hold a non-binding referendum on statehood on September 25, despite the objections of Baghdad and neighboring Iran and Turkey, as well as the United States.

On Monday, Iraq’s supreme court ordered the suspension of the referendum as legal and political pressure mounted on the Kurds to call off the vote.

Israel became the first, and so far only, country to openly voice support for “the legitimate efforts of the Kurdish people to attain a state of its own,” as Prime Minister Benjamin Netanyahu said last week, without specifying where and how. 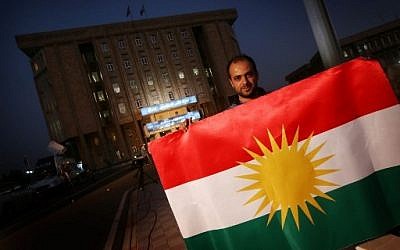 An Iraqi Kurdish man holds a Kurdish flag as he stands next to Kurdistan’s parliament building in Arbil, the capital of the autonomous Kurdish region of northern Iraq on September 15, 2017. (AFP PHOTO / SAFIN HAMED)

Netanyahu’s statement came after remarks made earlier in the month by former general Yair Golan, who said he liked the “idea of independent Kurdistan.”

“Basically, looking at Iran in the east, looking at the instability (in) the region, a solid, stable, cohesive Kurdish entity in the midst of this quagmire — it’s not a bad idea,” Golan said at the Washington Institute for Near East Policy.

He also noted Israel’s “good cooperation with the Kurd people since the early 1960s.”

To Gideon Sa’ar, a former Israeli minister for the Likud Party, who recently returned to politics after taking time out, the Kurds are a minority group in the Middle East that, unlike the Jews, have yet to achieve statehood.

“The Kurds have been and will continue to be reliable and long-term allies of Israel since they are, like us, a minority group in the region,” he said. 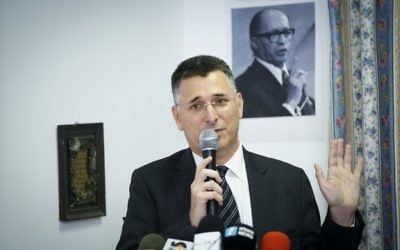 “We need to encourage independence of minorities that were wronged by regional arrangements since Sykes-Picot over the past 100 years and have been repressed under authoritarian regimes, like Saddam Hussein’s in Iraq and the Assads in Syria,” Saar said.

The Sykes-Picot agreement was a World War I-era deal between Britain and France laying out boundaries in the Middle East.

Sa’ar, too, noted Kurdistan’s efforts in pushing back Islamist forces.

“Looking at the Kurds’ location on a map you realize they can be a dam blocking the spread of radical Islam in the region, and in practice we’ve seen them exclusively fighting IS,” he said.

“Throughout the years, the Kurds were never drawn to anti-Israeli or anti-Zionist perceptions and maintained good ties with the Jewish people and Israel.”

When Jews living in Iraqi cities were subject to harassment under Baath rule in the early 1970s, Kurds smuggled them out of the country to safety, she said.

“I don’t know to what extent (Kurdistan) could be an ally since it would be pressed by all kinds of Arab factors, but at least it won’t be hostile towards Israel. That’s certain,” said Bengio, author of the book “The Kurds of Iraq: Building a State Within a State.”

“What’s more important, it would be a buffer against extremist elements — not just Iran, but also others,” she said, noting IS and Iraqi Shiite militias.

A Kurdistan which emphasized “secularity, democracy, moderation and acceptance of the other” would be “a positive element in a region that is becoming increasingly extremist and unstable,” Bengio said. 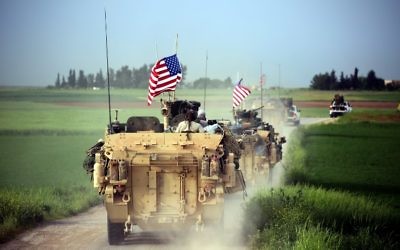 US forces, accompanied by Kurdish People’s Protection Units (YPG) fighters, drive their armored vehicles near the northern Syrian village of Darbasiyah, on the border with Turkey on April 28, 2017 (AFP PHOTO / DELIL SOULEIMAN)

The US supports the current Kurdish autonomy in northern Iraq and relies on its forces in the war against the Islamic State group, but has urged the Kurds to call off the potentially “provocative and destabilizing” independence referendum.

To Sa’ar, the former minister, Israeli leader Netanyahu should “use our leverage in the US to strengthen the Kurds in a very crucial moment of their national struggle.”

Islamized Armenians are a women’s issue Nilüfer Bulut writes: Forced Islamization was one of the methods of survival during what Armenians call “Medz Yeghern,” the great catastrophe. Professor Zerrin Kurtoğlu Şahin says that by complying with the imposition of Islamization, these Armenians (mostly women and children) were assured their biological existence, but their cultural and social connections were ripped away.

Former anti-ISIS envoy McGurk urges US to not abandon SDF Brett McGurk, former special presidential envoy for the global coalition to counter ISIS, told Rudaw that the U.S. should not abandon the YPG-led Syrian Democratic Forces (SDF). Praising the group’s role in fighting ISIS, McGurk said that the world needs to know the SDF’s efforts in keeping jihadist prisoners in camps in al-Hol and other parts of northern Syria.

Can the would-be caliph from Turkey be stopped? The Turkish leader is uniquely poised to take center stage in many of the area conflicts and advance his grand design of reviving an Islamic caliphate under his rule.