Israeli official: Jerusalem providing aid to Kurds since US pullout in Syria >>THE TIMES OF ISRAEL

‘WE IDENTIFY WITH THE DEEP DISTRESS OF THE KURDS’

THE TIMES OF ISRAEL

‘We are proud of our taking a stand alongside the Kurdish people,’ says Deputy FM Tzipi Hotovely, adding the Kurds provide a bulwark against spread of Iranian influence in area

Israel has been providing aid to the Kurds in northern Syria since the US withdrawal from the area, a senior Israeli politician said Wednesday, warning that their defeat would allow Iran to further entrench itself in the area.

“Israel has received many requests for assistance, mainly in the diplomatic and humanitarian realm,” Deputy Foreign Minister Tzipi Hatovely told the Knesset Wednesday in remarks reported by the Reuters news agency. “We identify with the deep distress of the Kurds, and we are assisting them through a range of channels.”

Hotovely gave no details on the Israeli help, only saying that during “dialogue with the Americans… we state our truth regarding the Kurds…and we are proud of our taking a stand alongside the Kurdish people.”

Her comments were the first confirmation that Israel has carried out the pledge made by Prime Minister Benjamin Netanyahu on October 10 to assist the Kurds.

“Israel strongly condemns the Turkish invasion of the Kurdish areas in Syria and warns against the ethnic cleansing of the Kurds by Turkey and its proxies,” Netanyahu said in a statement released by his office at the time. “Israel is prepared to extend humanitarian assistance to the gallant Kurdish people.”

The United States last month announced a pullout from Kurdish-held areas in northeast Syria, allowing Damascus, Ankara and Moscow to carve up the Kurdish-held region.

The surprise move by US President Donald Trump unnerved Israel and has been a rare instance of disagreement between Jerusalem and Washington, although the Netanyahu government has sought to avoid directly criticizing Trump.

Turkey and its Syrian proxies on October 9 launched a cross-border attack against Kurdish-held areas, grabbing a 120-kilometer-long (70-mile) swathe of Syrian land along the frontier.

The incursion killed hundreds and caused 300,000 people to flee their homes in the latest humanitarian disaster in Syria’s brutal eight-year war.

Turkey and Russia then struck a deal in Sochi for more Kurdish forces to withdraw from the frontier on both sides of that Turkish-held area under the supervision of Russian and Syrian forces. 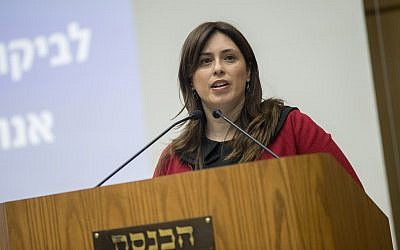 Hotovely said Israel was concerned that Iranian-backed forces could extend their influence into the area. Israel has long-been fighting to uproot the Iranian entrenchment in Syria.

“Israel indeed has a salient interest in preserving the strength of the Kurds and the additional minorities in the north Syria area as moderate and pro-Western elements,” Hotovely said.

“The possible collapse of the Kurdish hold in north Syria is a negative and dangerous scenario as far as Israel is concerned. It is absolutely clear that such an event would bring about a bolstering of negative elements in the area, headed by Iran,” she said.

Reuters said Syrian Kurds could not immediately be reached for comment on her remarks.

Last month an official in the Syrian Democratic Forces had called on Israel  to take action against Turkey’s military incursion into northern Syria.

The official, who spoke on condition of anonymity, also expressed confidence that the Jewish people would not neglect the plight of Kurds in northern Syria, invoking its history of persecution. 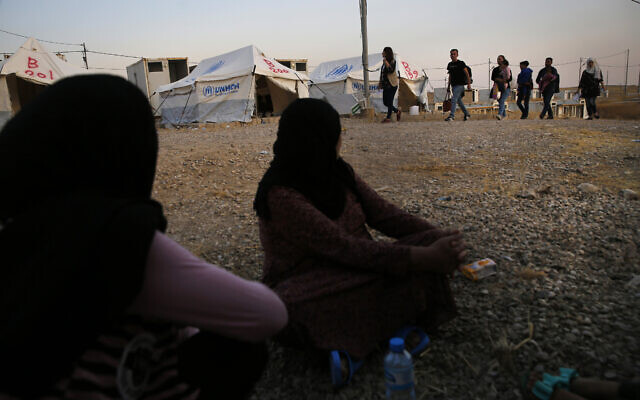 In this Oct. 17, 2019 file photo, Syrians who were displaced by the Turkish military operation in northeastern Syria carry their belongings as they walk to receive a tent at the Bardarash refugee camp, north of Mosul, Iraq. (AP Photo/Hussein Malla)

“The State of Israel must work to put an end to this war that is killing women and children and expelling civilians from their homes,” the official told The Times of Israel in a text message.

“I am certain that the Jewish people understand the situation of the Kurdish people best because it lived these types of dangers throughout much of its history. I am sure that it will not stand by idly as our region faces Turkey’s terror,” the SDF official said.