The decision making committee of Kurdistan Freedom Party (PAK) contributed to ratify an historical project of unifying its Peshmarga forces into the ‘Kurdistan National Army’.

Choosing this name for the PAK forces goes back to the Peshawa Qazi Mohammed’s army of Kurdistan during its ratification in the State of Republic of Kurdistan.

The reasons behind organizing this army are the following:

2- PAK spends all logistics,weaponry and ammunition to one big army of Kurdistan National Army.

3- as a spiritual path and a faith to Peshawa Qazi Mohammed’s republic,we found ourselves responsible for keeping on his pledges to the Kurdish nation.

4- Kurdistan National Army will be a neutral and a pure national forces that PAK will fuel.

5- PAK calls for jointment of forces from all the Rojhalat parties to join this legendary group of heroes for reasons of: organizing ourselves better for Rojhalat, can a mixture of force but with one MAIN goal, so Commanders of all joint forces can command this big army.

State of Republic of Kurdistan/ Kurdish Republic of Mahabad
Short-lived state in today’s western Iran from 1945 to 1946.

The republic’s official name was “State of Republic of Kurdistan”, but was also referred to as “National Government of Kurdistan”. Through its one year existence, the republic never quite decided whether it was an independent state or autonomous region of Iran.

The capital of the republic was Mahabad. The extent of the republic was never set — there were peaceful negotiations with the neighbouring Iranian province of Azerbaijan about which republic should control border towns like Khoy, Salmus and Orumiyeh in the north, and Miandouad in the east.

A treaty of friendship was signed with Azerbaijan, covering cooperation on the most important political issues, like economy, military and foreign politics.

The republic introduced Kurdish as the official language, and the language to be used in educational institutions.

In 2006 the first congress of the party was held in the city of Hewler (eng. Erbil).

The congress elected Mr. Ali Qazi, the son of the first Kurdisk president in history (internationally known as the Republic of Mahabad), and Mr Hussein Yazdanpana as the vice president of the party. In addition to these changes they also formed their own Peshmerga forces.

It´s not easy to form a political party in Iran, in the beginning up to 20 members of the party was assassinated by Iranian backed assassins and “security” forces, many have been executed in Iranian prisons.

PAK regards itself as a national liberation freedom party. PAK Peshmerga is fighting for achieving national sovereignty and security for all Kurds. Pak Peshmerga have been involved in the Iraqi Civil War, fighting the Islamic State of Iraq and the Levant (ISIL) along with other Kurdish forces.

The last major Iranian Kurdish uprising was in 2005. It failed to topple the state, but it was huge and made headlines all over the world. “It swept many cities and towns and even villages,” Mohtadi said. “It started from Mahabad. Young people were brutally killed by the authorities, tortured and then killed.”.
Zagros Yazdanpanah:

After that, all of Iranian Kurdistan rose up. Everywhere in all cities there were demonstrations against the Iranian regime. Our people inside are organized. 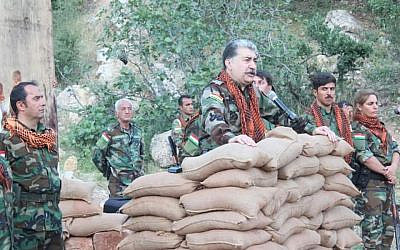 Gen Hussein Yazdanpanah
Yazdanpanah cut his political teeth as a young teen in Iran’s 1979 Islamic Revolution, which sparked a Kurdish rebellion that left 10,000 dead. Fleeing to the Zagros mountains, he witnessed first-hand the guerrilla war between his fellow Kurds and ayatollah Khomeini’s army, an obscure sideshow to the early years of the 1980-88 Iran-Iraq war.

Sheltering in Iraq, his elder brother set up Pak in 1991. A few months later, his brother was murdered, allegedly by Iranian agents. Today, Pak is one of a handful of exiled Kurdish groups which Tehran considers terrorists. Most would settle for some form of regional autonomy. But Yazdanpanah has his eye on the bigger prize of a free Greater Kurdistan.