US Senator Amy Klobuchar accused President Donald Trump of endangering Israel through his order to pull US troops out of Syria, a move that cleared the way for Turkey to invade an area of the country held by the Kurds, who are US allies.

“Think about our other allies, Israel, what do they think now — ‘Donald Trump is not true to our allies,’” Klobuchar said Tuesday at a debate for Democratic presidential candidates in the suburb of Columbus, Ohio.

Other candidates also condemned Trump’s pullout, although there were particularly tense exchanges between Congresswoman Tulsi Gabbard, who said that US troops should leave the Middle East entirely, and others — like South Bend, Indiana Mayor Pete Buttigieg and former vice president Joe Biden — who said some kind of a troop presence is necessary to prevent mass killing and protect US interests. 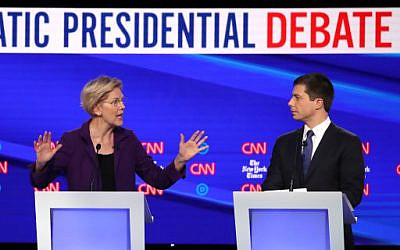 Gabbard’s previous stance, as well as her decision to meet with Syrian President Bashar Assad, has come under fresh scrutiny following Trump’s announcement.

Gabbard has criticized Trump for how he’s conducted the withdrawal but said Tuesday that while Trump has “the blood of the Kurds on his hands… so do many of the politicians in both parties who supported this regime-change war.”

Buttigieg said that the killings were “the consequence of a withdrawal and a betrayal by this president of American allies and American values.

But Warren added that a withdrawal had to happen in an appropriate, thoughtful way — “certainly not like this.”

The comments were the first from Netanyahu on the situation in Syria after remaining silent for several days following Trump’s decision. Several other Israeli officials have denounced the Turkish operation and urged support for the Kurds.