Parti Azadi Kurdistan, known as PAK was established by a group of Kurdish freedom fighters under the leadership of Mr.Saied Yazdanpana on 20th of May 1991. Soon after the party was established, on 9th September 1991 he was assassinated by Iranian agents in the city of Suleymaniyeh in Bashur, Iraqi Kurdistan.
In 2006 the first congress of the party was held in the city of Hewler (eng. Erbil).
The congress approved a three structure party program, namely; General assembly, central committee and judiciary committee. 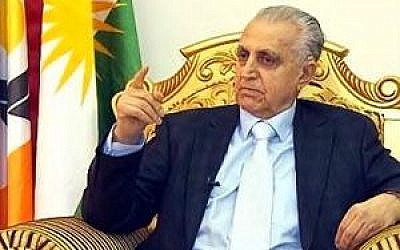 The congress elected Mr. Ali Qazi, the son of the first Kurdisk president in history (internationally known as the Republic of Mahabad), and Mr Hussein Yazdanpana as the vice president of the party. In addition to these changes they also formed their own Peshmerga forces.
It´s not easy to form a political party in Iran, in the beginning up to 20 members of the party was assassinated by Iranian backed assassins and “security” forces, many have been executed in Iranian prisons.

PAK regards itself as a national liberation freedom party. PAK Peshmerga is fighting for achieving national sovereignty and security for all Kurds. Pak Peshmerga have been involved in the Iraqi Civil War, fighting the Islamic State of Iraq and the Levant (ISIL) along with other Kurdish forces. They received training from US forces during their struggle against ISIL in Kirkuk, where they played a crucial role. In April 2016, HAK-R attacked Iranian government security forces in Sanandaj during the annual Army Day Parade of Iran, ending its cease-fire and resume its armed struggle. “It started when one of our comrades stepped on a blast mine, which had been planted by Iranian Revolutionary Guards. After the initial explosion, Iranian forces started shelling and shooting at the Peshmerga group, The Peshmerga responded to the attack and the fire exchange lasted for at least 20 minutes. The group of Peshmerga succeeded to repel the attack and left the area. As a result of these clashes two Peshmergas named Azad Ali and Amir Nadir were killed and one Peshmerga was injured.

PAK is a center left political party. Their political program is based on visions of gender equality, democratic rule of law, peace and co-existence with other minorities living within the Kurdistan region. They are a democratic, secular, pluralistic and parliamentary party that stands for human rights. Even though they are very secular, they believe in a parliamentary system that will respect all ethnicity as religious diversities within the Kurdish society, based on UN´s Universal Declaration of Human Rights.

Kurds are one of the most oppressed ethnic groups in the world. Just as Israel have been a cause for instability in the region, so is the question of a free and sovereign Kurdish state. PAK believes that a reunion of Kurdistan in a peaceful matter will not only bring justice to the Kurds, but become an important reason for creating stability and balance in the region. For example, nothing would weaken the Iranian regime more than an independent Kurdistan.

PAK regards the Kurdish autonomy in Iraqi Kurdistan as an historical national and democratic victory for Kurds. That´s the reason for then Bashur was under attack of ISIS, PAK Peshmerga took actively part of the defense of Bashur, by sending their Peshmerga to the front. Their participation has been acknowledged by the representatives of the KRG, USA and France.

Read More:
Meet a Kurdish Commander Who Stares Down ISIS Every Day
Iranian Kurdish PAK commander says Iran supports Islamic State
Martyr Mam Hejar is the slogan of unity for Kurdish people
The Next Iranian Revolution
‘We are only 1,000, but we fight like 10,000,’ says leader of Kurdistan Freedom Party
Iranian-Kurdish Female Fighters Train in Iraq’s Kurdistan Region